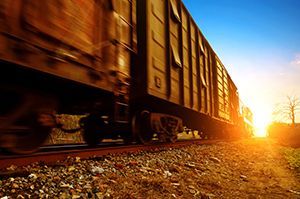 Growing up, my grandparents had a railroad track that ran behind their house. I remember loving to cross the tracks to play in the dense woods. Sometimes trains would stop, sometimes pass slowly, and other times speed through the area. Let’s put this in a visual:

You’re waiting at the crossing for the train to pass. It will be a while, that much you know, because the train is stopped. You hear the train creak and see the wheels begin to turn ever so slowly. It seems to take forever for the train to gain any speed. That’s the problem with a train: it takes so long to get going. The locomotives seem to barely be able to handle the load. But once the train gets moving down the tracks at 70 miles per hour, those same engines have no trouble maintaining the speed. It’s the principle of inertia at work: Things at rest tend to want to stay at rest and things in motion tend to want to stay in motion.

The inertia that a moving object builds is called momentum. It takes lots of energy to build momentum but far less energy to maintain it. This is more than a principle of physics—we can apply to our personal lives and to the life of BGHNC as well.

John Maxwell has a book titled The 21 Irrefutable Laws of Leadership. One law is that of momentum. Maxwell argues that to lead, one must create and sustain momentum among those in the organization. Organizations experiencing a lack of momentum, where there is little forward movement are often referred to as plateaued or stagnant. But this doesn’t last long—negative momentum (going backward) soon follows.

Momentum was in one of the stories Jesus told: A wealthy man who went away for an extended period called together three associates and gave them money to invest while he was gone. One was given five talents, another two, and the third was given one talent to oversee (Matthew 25: 14-30).

Here’s the lesson: We’re to invest wisely what Jesus gives us in opportunities, finances, abilities, and time. Jesus indicates that when we try to do something with what we’ve been given, we’re going to end up with more. That’s the principle with momentum and something we work to instill in the youth and families we serve through BGHNC. The one who works and takes risks to multiply what he has been given by God has even more, and the one who doesn’t do anything to gain more will lose what he has. Sometimes the greatest risk is in doing nothing.

There are many things that cause us to lose our momentum. Discouragement, failure, a lack of focus, ungratefulness, and inattention are some of the factors that can cause resistance to our forward momentum. Most importantly, there are several steps we can take to BUILD momentum:

It takes a great deal of energy to get a train moving 70 miles per hour down the track, but once it gets going it’s nearly unstoppable. That’s the power of momentum, something we hope to harness to the benefit of BGHNC. Understanding the principle of momentum and putting it to use can help us move from good to great!

Ricky Creech is the President/CEO of Boys and Girls Homes of North Carolina.